Time to catch up. I don't want to forget anything from this season of life!! I also am finding it difficult to tear myself away from my little darlin' long enough to blog about her. So, I'll be backing up a bit and posting about what she's been up to for the last month.
She is now 4 1/2 months old. At her four month checkup she weighed 15 pounds and 7 ounces and was 25 inches long! Unfortunately, the week before then she had a virus that involved sniffling, runny nose, and a dry cough followed by a rash. At first I thought it was teething related, but no it was a virus. Then a week later after her well baby check it came back only this time with a moist, persistent cough that had me worried. I took her back in and sure enough she had bronchiolitis. Within twelve hours of starting antibiotics she was showing signs of improvement and better yet her smile was back!! :)
In actuality, her smile is never far away at all. She is the sweetest and smileyest (is that a word) baby I know. In the morning when she sees us standing above her, she pulls her chubby little fists to her chest and shrugs up her shoulders and just gives us this HUGE, open mouthed, toothless, excited grin and giggle. I LOVE it!! She also has a new hobby.... making silly faces. My parents, bless their little hearts, taught her how to make pffft!! noises, although it comes out more like bubbles and spitting. Thanks Mom and Dad!! :) She also has started sticking her tongue in and out very quickly and giggles like crazy when we do it back to her. This last week I was lying in bed in the morning half awake when I heard "smack smack" followed by giggles. She had learned how to smack her lips together and hasn't really stopped since then. She sucks in her upper lip and then "Smack" and "hee hee hee". At least she can amuse herself. Speaking of amusement, she has also found her toes. She loves them. She is constantly kicking her feet into the air to look at them and then grabbing her toes and pulling on them. It's SO cute! 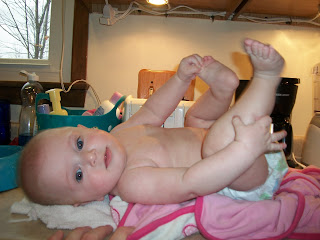 Her other favorite thing is to grab our fingers and pull herself up into a sitting position. Then she tries and sometimes succeeds to pull herself into a standing position. At this point we say "Big girl!" and she giggles. We've really tried to get her onto the floor more, but I hate to do it when the dogs are in the house so I wait till they are outside. She is staying on her belly more now, but still not rolling over from her back to her belly. Grandma and Grandpa Ives bought her an exersaucer as an early Christmas gift and she likes to play with all the attachments. I've noticed her movements becoming more deliberate and her motor skills becoming more finite. I think she also likes the exersaucer because it puts her in a better place for doggie viewing. She watches Junie and Spanky walk by, sometimes gets a lick on the head or the face, and then watches their tails as they walk away. 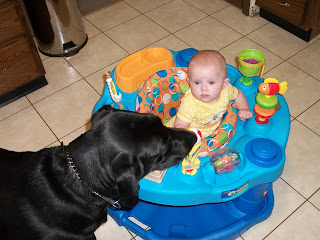 She likes to play with her rattles and really loves books. We like Goodnight Moon, Dr. Suess' Mr. Brown Can Moo, Can You? and There's a Wocket In My Pocket, as well as her Baby's First Bible. I've realized we don't have as many books as I'd like and am asking for books for her Christmas gifts from family. 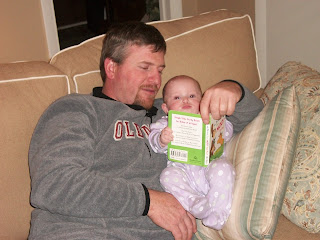 She has fallen into a new eating/napping routine and usually takes three-four naps a day. One short one in the morning, a long one in early afternoon and one or two short ones later in the afternoon. Sometimes she doesn't necessarily sleep but just spends some time in her pack and play talking to her toys or toes and listening to music.
Yesterday we tried cereal for the first time. She didn't act as though she didn't like it, just smiled and spit it out. Today went better and I was able to get her to take about half the recommended amount with only a small amount ending up on her face.
She had another first these last couple of weeks other than sickness and cereal. She went to her first harvest party at our church. Here she is all bundled up. 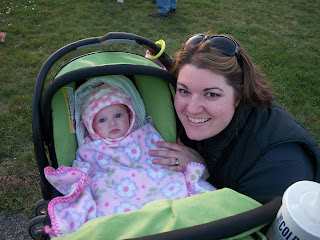 I can't believe how big she is getting. Everyone says "it goes by so fast" and so far it's true. I sometimes want to stop the clock and hold onto each of these stages a little longer. I don't want her to stop growing but if she could just slow down.... And here's one of her and her daddy..... she likes to lay on his chest and talk and play with his beard. These are my two favorite people ever and I love watching them together. 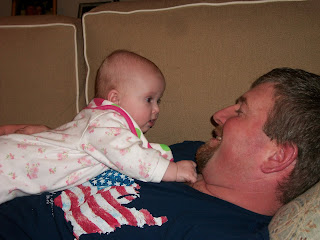 Stephanie M.
I am first and foremost a daughter of the King of Kings and saved by grace. My goal in life is to enjoy and experience every moment of this crazy life. I want to experience the highs and lows and the good and bad all the while finding joy in the little things and learning lessons in the difficult. I have been married for 10 years to the love of my life, Darian. I am a Momma to two black labs Spanky and Junebug and recently adopted our first child a beautiful baby girl named Melana Joanne. She is the sweetest baby and I still can't believe we are blessed to call her ours. In my spare time, I work nights as a Labor and Delivery nurse.